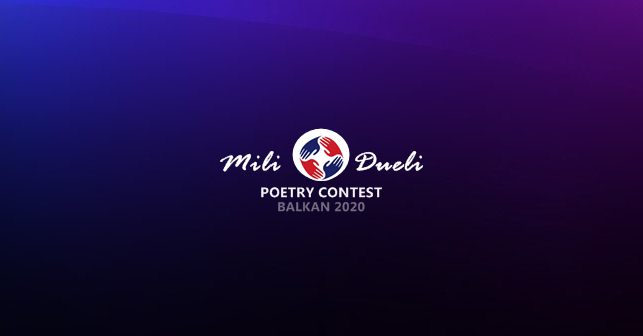 Applications for the eighth season of the most popular online Balkan poetry contest, Mili Duelli, ended on June 1, 2020. In the period from February 20, 2020 to May 31 of the same year, the call for applications was open. As a reminder, authors of poetry could apply for the competition, regardless of age, race and ethnicity. For authors under the age of 14, parental cooperation or permission, is also required. Applications were open at a total of 4 links (3 Google surveys and 1 Webanketa), and were adapted to different languages (Bosnian, Bulgarian and English).
Participation in the competition did not imply any financial compensation, therefore, applications are completely free.

Ultimately, a total of 739 entries from 52 countries arrived at Mili Dueli 2020. This is also the largest number of applications for one season so far, since Mili Dueli have existed.

Promotion. The promotional campaign for applying for the contest is marketed exclusively on the social networks of the organizers and the contest, without any financial investment. News about the competition was spread through social networks, domestic and international portals that supported the project.

Application analysis. This year, the largest number of applications came from Serbia (197), and compared to the previous year, the number of applications increased by 54, which is an increase of over 20%, which we are especially proud of, since Mili Dueli have the most followers in Serbia. Almost a third (26.7%) of all entries this season come from this country, which justifies the fact that Serbia is the only country that has more than one winner in the history of Mili Dueli.
It is interesting to note that in the most controversial area in the Balkans, Kosovo, the number of applications increased from 6 to 14 compared to the previous season, which is an increase of more than 100% and a good indicator that even despite regional instability, authors with Kosovo passports respond on the competition. Therefore, the goal of the project is communication between artists, in order to tolerate the existing situation, until the best solutions are found for both parties.

The biggest surprise this year, in terms of the number of applications, is certainly 🇲🇪 Montenegro. Unlike last year when it had a share of 8.1% with 44 applications, now the number of applications has increased by about 80%, and the country has 76 representatives. We are also very grateful to prof. Senada Jeshevich, who invited her students to apply. In Montenegro, the registration rate is as high as 13 per 100,000 inhabitants.

🇭🇷 This year, Croatia had 4 more applications than last year, and the application rate is 1.8 per 100,000 inhabitants.

🇲🇰North Macedonia has 41 applications this year, two less than last year, which is within our standard deviations. The registration rate is 2 per 100,000 inhabitants.

This year, Mili Dueli have the largest increase in popularity in Albania, by almost 300%, where from last year’s 9 applications, the number of applications this year is 26. This is extremely important to us, since the Albanian language is different from the surrounding languages. communication is therefore difficult. Nevertheless, we believe that this year the English language and translations of poetry into local languages and the Albanian language will greatly improve the relationship between the artists of Albania and the region.

🇸🇮 Slovenia has as many as 8 applications this year, which is an increase of 125% compared to last year. By the way, the popularity of Mili Duel in Slovenia is spreading more slowly compared to other countries of the former Yugoslavia.

🇳🇬 Nigeria, as the most advanced African country, submitted a total of 16 entries to the contest. It is also a record number of applications from one African country ever, as well as a great opportunity to expand Mili Dueli to the African continent, especially in Nigeria, where English is the official language. In addition to Nigeria, for the first time from the African continent, poets from 🇦🇴 Angola, 🇺🇬 Uganda, 🇿🇲 Zambia, 🇲🇦 Morocco, 🇲🇿 Mozambique, 🇹🇬 Togo, 🇬🇭 Ghana, 🇰🇪 Kenya, and there is and last year’s finalist from Swaziland, today’s renamed state called 🇸🇿 Eswatini.

An increase in the number of applications was also recorded in 🇬🇷 Greece and 🇷🇴 Romania, where the expansion of the Mili Dueli network is still expected. Also, applications came to us from 🇷🇺 Russia and 🇹🇷 Turkey. This year, the whole of Central Europe (except Hungary) will have its representatives in the Mili Dueli.

In South America, applications arrived for the first time from 🇧🇷 Brazil and 🇦🇷 Argentina.

WHAT’S NEXT?
* How will the contest run in the next period?

RECOGNITIONS AND AWARDS. All authors who are on the list for the Second Round will receive recognition for poetry, cooperation and promotion of culture through digital technologies, of course, if we manage to establish cooperation with the author, which means quality relationship and communication. Other prizes are awarded according to the development of the competition.

WORD OF THE ORGANIZER

First of all, I would like to congratulate all the authors who applied for the Mili Dueli 2020. 739 applications! Big 739 applications, without a single stamp spent on contest promotion. And you applied from 52 countries around the world. And you speak at least as many languages together. And here we are. Poetry united us to believe.🇦🇱🇦🇴🇦🇷🇦🇹🇦🇺🇦🇿🇧🇦🇧🇷🇧🇬🇨🇦🇨🇳🇭🇷🇨🇿🇩🇰🇫🇷🇩🇪🇬🇭🇬🇷🇮🇳🇮🇶🇮🇱🇮🇹🇰🇪🇽🇰🇱🇻🇲🇰🇲🇾🇲🇹🇲🇪🇲🇦🇲🇿🇳🇱🇳🇬🇵🇰🇵🇭🇵🇱🇷🇴🇷🇺🇸🇦🇷🇸🇸🇰🇸🇮🇸🇿🇸🇪🇨🇭🇹🇬🇹🇷🇺🇬🇺🇦🏴󠁧󠁢󠁥󠁮󠁧󠁿🇺🇸🇿🇲 Look at these colors that act like colorful rectangles, and in fact, we’re all just looking to find our flag, because there’s something magical about these countries of ours. There is something, and it is greater than intellect and humanity. Origin. And it does not make the writer “national”, but unique and anthological. Just like flags, we are all similar, and we all have something that sets us apart from others. Instead of rejoicing in differences, rejoice in similarities; because it’s always easier when there’s someone else … someone … and something. And keep the differences in your pockets, so amaze us, when you feel different.

All my work in Mili Dueli is also based on numbers – trust, not money. Because there is something that has no price. The whole organization, from year to year, you know that it was not easy, moreover it was too demanding and can not be paid, especially if you are 20, 21, 22, … years old, when the world is so colorful and friendly to you. Yet all these years, from the 16th to the 24th, I have been with you and for you. And I’m not sorry for the time I spent on you. Who knows what a doctor of medicine I would be like if I hadn’t met all of you and if I hadn’t fallen in love with the people and the Balkans – because of you! Mili Dueli really offered something new in the Balkan culture, in the literary approach of our writers, in general … For the first time, the authors were able to apply and get the most constructive reviews I could give them for free, thanks to those who decided to help me in this mission TO GO BETTER, without leaving ourselves. And we succeeded! It’s not a shame not to know, to have a mistake, two, five, … It’s a shame to suffer for what you haven’t tried enough to edit to be tailored.

Write and read, because only a book is heavier than the mind!. And only the writer creates worlds in it, worlds that do not die and do not pass away, as we will all go through here.

In Mili Dueli, we are looking for a poet who is ready to amaze the world, not only with his/her poems, but also with his/her appearance, peculiarities and attitudes. We are looking for brave people whose goals and achievements are motivating for all of us who deal with poetry out of love and unconditionally. We enter the whole project without burden, happy and aware of our roles, so we are looking for authors who will be like that, aware not only of their achievements but also of their possibilities. We will try to get the best out of you – we will be honest and vain, so be the same!

An evaluation of your poems awaits me in the coming period. About 1500 poems are waiting for me. You are not even aware of how interesting, gifted and big your thoughts are! Therefore, stretch your wings out of your nests as well, for our sky which needs such birds!