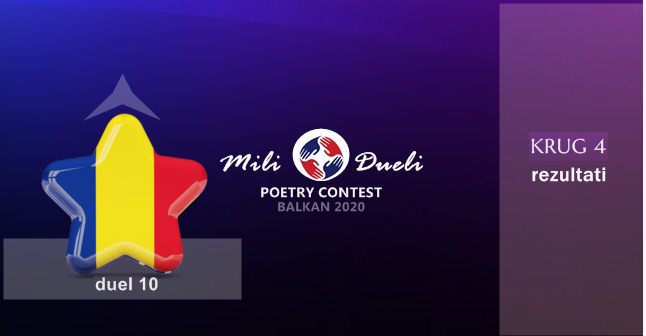 “Camelia Monica Cornea… This poem contains fluttery motives, which contributes to dreamy and vivid impression. I find this poem quite interesting, since the tone goes from playful- at the start, to dramatic- at the very end; while it flows smoothly and elegant.

Danu Florentina…This poem is quite a picturesque miniature, it’s pleasant, with interesting wordplay in one verse. I like it, but I feel like it lacks a bit of depth, or at least a bit of strength.

Mariana Eftimie Kabbout… This is a classic poem, quite punctual. I love the first two strophes, but the ending is not perfect. It calls for something firmer, stronger… Something that could finish the poem with a bang. This way, it’s not bad but it does not give the complete effect that, with a bit of effort, it could.

Laura Ionescu… I see the talent here, but it needs more work. The ideas are very good, motives are fine, it’s creative; but the very shape of the poem and it’s structure… It’s troublesome. The writer is still quite young, so I know she can make it perfect if she continues to work on her own growth as a poet. Read more, write more and good luck.”

“CAMELIA MONICA CORNEA – CAMELIA MONICA CORNEA – Obviously, this author has a penchant for beautiful written words. When it comes to the poetry in the poem he introduces himself to us, I notice that there is a lot, a lot of great material to write two or even three poems out of this one offered. The poem is written with a mixture of thoughts, rather unfinished and meaningless from a multitude of extraordinarily thought-out words, but the poem, so crowded, has lost its meaning. In the end, I would recommend a more meaningful way or at least a more specific theme, plot, dynamics or rhythmicity of the song. It would be a shame to ruin this talent only with selected words and make a song out of a song. For the Semifinals, this was overly brave.

MARIANA EFTIMIE KARABOUT – THE TREE OF MY BIRTH – An attractive poem.

LAURA IONESCU – I don’t accept poetry worthwhile if we just ask ourselves through the poem. Too many questions, nowhere with answers. Poetry should rest and not burden us.”

“This is a poem. This is life more than a poem. It amazes the way of thinking, enchants with metaphors, intoxicates the rhythm. Topics very interesting, everyday and age-old, ideas sublime, way of telling very good. I have the impression that in some places the translation (actually a translation) is more successful than the original or it is so good because of the influence and actions of the mentor. It’s hard to judge, but the lyrics are amazing, especially the first poem.
Congratulations to the organizer, participants, translators, mentors …”

You can read poems by Romanian authors here: