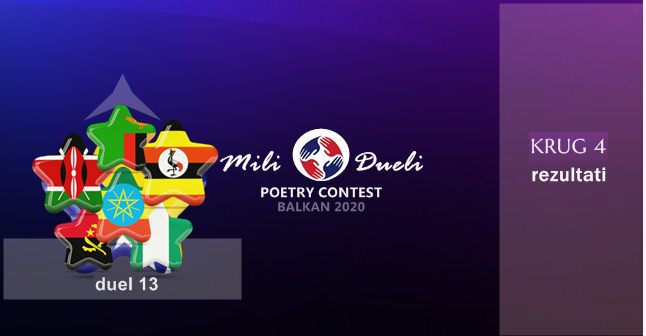 “Haeven Kidane… The form of the poem is not present at all. Poem this long deserves a bit of space and a break, just to catch breath. Since it’s the poem which speaks from two different angles, I do believe that at least those two could be ‘separated’ in a way- so it’s completely clear. There’s no distinct border between two parts of the poem. There are some strong and vivid moments- and that deserves a praise. Idea of the poem is good, the subject is interesting. Yet, untidiness and disorderliness completely prevailed everything else.

Kenneth Cheruiyot… This poetic miniature is lovely. It’s short, precise, strong enough; it has an emotion which transfers to the reader easily. Motifs in the poem are striking. I love it.

Raphael Tersuwe Akaayar… This poem is very emotional. The very start is quite striking and memorable. Then goes the explanation part, which is quite descriptive. It’s also very necessary here. The ending: gives me chills. I’m quite happy with this one.

Okorie Chukwukamma… This poem really screams it’s own title. I like the energy of it, it’s strong and fast and playful. Yet, the subject itself is weaker than some of the poems in this group. The message is weaker. The poem is well done and I like it, but it’s not among the best ones here.

Johan Chanda… The problem of this poem is the shape of it, it lacks the rhythm and the melody, it’s somewhat cluttered. Yet, the thought process here is what’s interesting. Some parts of it are simply pale ( like: “If I die young know the stress was my companion, depression was my umbrella and anxiety my shadow”- this could be written in far more interesting way). But, the other motives and the other ideas here are far more poetic and likeable. So, I believe this writer has a lot of work to do: but it’s all just “physical” matter. The emotion is there, the uniqueness is there.”

Lena Kyropoulos from Greece said: “Μr Kidane really touched deeply my heart by his emotional words… During the reading  time, I thought a hot knife invade my skin and my memories from my childhood… Gave me also a big lesson. I really feel blessed that I have read this poem… and no matter the result of the contest will be I would like to know him personally and to take an interview!!!.”

You can read poems by African authors here: