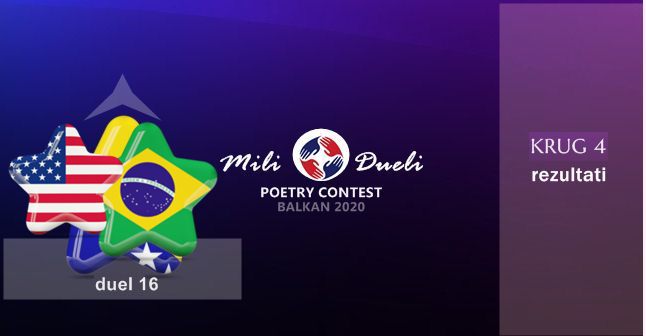 “Anne Thrope… This is one very vivid poem. It has some strong energy and I like Anne’s unique expression. I do believe that the ‘shape’ of the poem (or it’s form) could be more precise and more arranged, but nevertheless- I find this very well done.

Thiago Resende Soares… I appreciate the way how the three ideas are connected and intertwined. Yet, since the “Time” and “Death” are mentioned less times than “Love”, I do feel like the “Love” is too repetitive (the word itself). Also, I feel like there’s too much of explanations and not enough of depth in the expression. Yet, the poem brings a message clearly. So, I’m satisfied with this.”

Lela Zjajo from Germany said this: “There is and there is no expected poetry. I wish I had stayed thrilled but a lot is missing from these poems that would get my attention or a return to re-reading. I read and realized that these two poems left no trace in my soul. I am an irrevocable supporter of emotion and readable poetry, clarity, even if it was written in the simplest terms. The soul is missing here, the fluttering poetics is missing. Brutal everyday life leaves traces in these written verses. I’m sorry for my rudeness maybe, but the Finals need something much stronger, more meaningful, more energetic …”

You can read poems by American authors here: