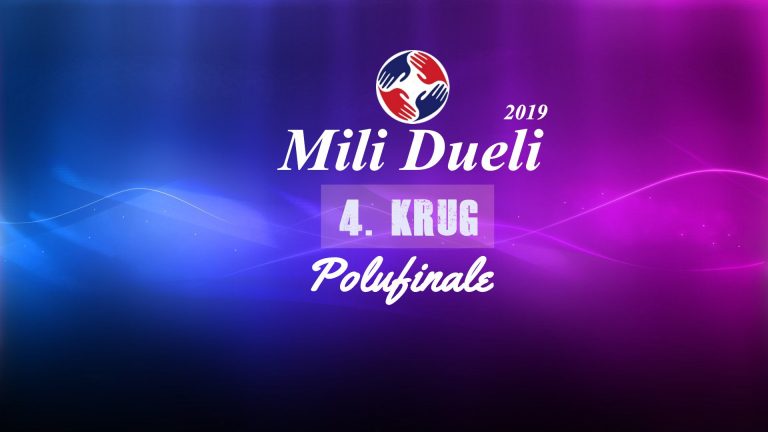 * Both of semi-final duels have 25 authors each.

Therefore, duels in which a total of 50 poets will be represented, are made on the basis of the author’s division based on the name of the mentor. The mentoring lasted in the period from 27.8 to 1.9.2019. Mentors were available to their authors for any consultation on poem selection and correction. Consultation with the mentor is optional. You can submit your poem without consulting your mentor before 1.9. 2019, when the deadline for submitting poems is.

After that date, as in the first three rounds, the organizer will create voting forms for the members of the jury.

The start date of Round 4 is September 5, 2019, when participants will also be featured on the social network!

The fourth round runs until September 8, 2019, after which the organizer will process the jury’s votes over the next two days and then announce the results.

VOTE IN THE FOURTH ROUND

The members of the international jury this season are: Lela Zjajo, Andjela Turukalo, Enea Hotic, Danja Gaspar Djokic, Simo Golubovic, Joze Brencic, Zdravko Odorcic and Nermin Delic. It is a team of authors gathered by the organizer of the competition, winners of previous seasons and artists engaged in poetry for decades.

The jury votes according to the following scheme:

In both duels of the semi-finals, in the web-page system (where poems and voting rules are presented), all members of the mentoring jury who have been assigned to a specific duel give Eurovision points to poems by the following principle:

In each of the two semi-final duels, in the web-based system, the organizer votes and awards his 760 points (50% of the remaining votes), ranking them first in one and then in the other semi-final group. He gives the Eurovision points on the same principle as the members of the mentoring jury. He credits his points in 2 categories:
1. SEMI-FINAL POEM – In this category, he will only give points based on the semifinal poem the author presents himself with.
2. GENERAL IMPACT – In this category, the organizer takes into account all the poems of the authors so far, their responses to the interview and the way they presented themselves, and the communication spent with them. In the 2nd semifinal, his authors will be presented, and he will not have the opportunity to vote for them in the role of a mentoring jury, but his authors will not be harmed, since in the 2nd semifinal- instead of him, votes will be given by the member of the jury that does not have authors in that semifinal – Andjela Turukalo. However, this is only one aspect that will affect the points in this category, because, as stated: earlier poems, the interview, and the communication that other authors had with him are also viewed here- by the organizer.

In this stage, readers DO NOT VOTE.
* NOTE: Readers vote in the Grand Final via Viber Votes!

All poems will be presented on the organizer profile: HERE and here on our official website.

15 thoughts on “Mili Dueli 2019: Organization of The Semi-Final (English version)”