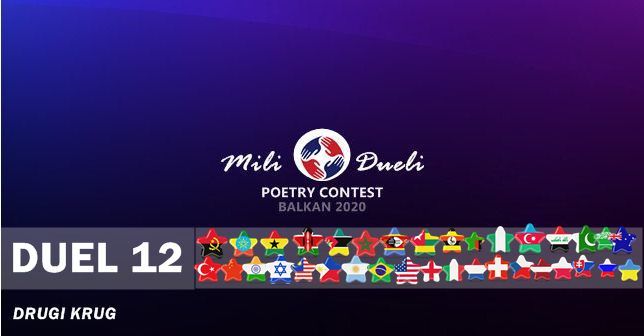 Mili Dueli 2020 (8th season) had 739 entries from 52 countries. It is the largest and most popular online poetry contest in this area, which for the 8th year in a row brings together poets from the region, and lately from around the world. Mili Dueli is headquartered from Jajce, Bosnia and Herzegovina. The purpose of the contest is to encourage intercultural dialogue among artists from the Balkans and the world. As it is one of the most sensitive regions in the world with a turbulent past, the aim of the contest is to build bridges of culture and mutual respect between once war-torn areas.

The contest is traditionally composed of 5 elimination rounds. In each round, the number of authors decreases, and in the last, Fifth round, the winner is decided by a voting system based on the Eurovision Song Contest scoring system. The main responsible person of the contest is Nermin Delic, the idea creator and organizer of the contest. For 8 years in a row, Mili Dueli have been gathering authors and spreading the influence of poetry in everyday life.

Briefly about the Second Round: After the selection in the First Round by the organizer of the contest, Nermin Delić, 476 authors were selected and presented in the Second Round. In the Second Round, the authors are classified in 12 duels, according to the countries they come from. Due to the number of participants, Bosnia and Herzegovina had 2 duels (DUEL 1, DUEL 2), and Serbia 3 (DUEL 3, DUEL 4, DUEL 5). Croatia, Montenegro, Northern Macedonia and Bulgaria had one duel each (DUEL 6, DUEL 7, DUEL 8, DUEL 9). Due to the small number of participants, authors from Albania, Greece, Kosovo, Romania and Slovenia were presented in one duel (DUEL 10). Poets with Balkan roots, but with current residence outside the Balkans, are grouped together in one duel (DUEL 11). In the end, all other authors coming from non-Balkan countries are grouped into one duel (DUEL 12).

The beginning of the presentation of the duel on the official Facebook profile of Milih Duel was on July 12, 2020. Duels are presented in order, every 2-3 or 4 days according to the scope of the duel. For the first 15 days from the presentation of the duel, the followers of Mili Dueli were able to vote in the comments by entering the author’s number below the picture where his/her poem is presented in the description. In addition to the readers, members of the jury, composed of 12 renowned and important for Mili Dueli Balkan artists, also voted. They selected 90% of the authors to pass to the Third Round. The other 10% is intended for the votes of the readers, for those who were not selected by the jury, and who have the great support of their friends and companions Mili Dueli.

DUEL RULES: In Duel 12, all selected authors from NON-BALKAN countries are presented. The number of participants in Duel 12 is 62 which is the largest one in this round. Duel 12 of Non-Balkan authors after the Second Round has primarly 35 but because some authors are the only representative of their countries, we decided to keep 42 authors. The continental principle was applied here. None of the participating continents (Africa, Asia, Australia, Europe, South America, North America) could lose more than 50% of the authors after the Second Round.

How about voting? The initial selection was made by the President of the Jury (1). She has made a list of authors they think should go in the Third round. Having that in his mind, the Additional member of the Jury (Organizer) (1) voted and apply continental principle to make it all be equally.  After that, the votes of the Readers (3) were reviewed for the authors who did not pass that selection either, and according to the decision of the readers who followed the voting rules, an additional authors were selected, as many contest rules as required.

Readers voted in the comments below 4 posted pictures in which a total of 62 poems of this duel were presented. The organizer reviewed all the comments, on all pictures of this duel and according to the rules selected 4 authors with the highest number of valid votes. 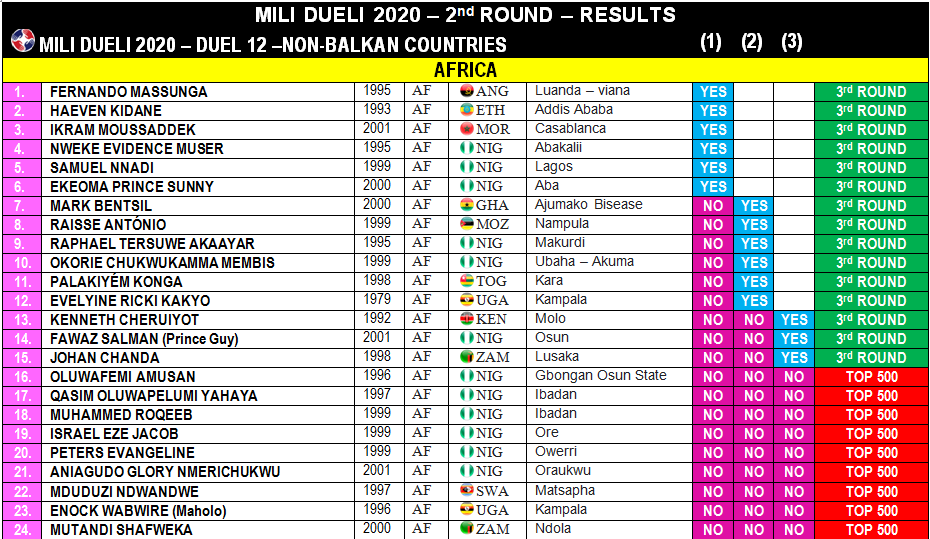 AUTHORS WHO PASSED to the next round of Mili Dueli will be informed on Facebook by a private message in the inbox about sending a new poem for the Third Round.

The third round will start in September, and the exact date with the rules of further selection of poems will be announced by the Organizer in the next few days. Please be patient!

AUTHORS WHO DID NOT PASS THE NEXT ROUND OF THE MILI DUELI, who remained in the TOP 500, will receive electronic recognition for their participation as they represented their countries, and will accordingly receive recognition for intercultural dialogue between the Balkans and the world.

All the presented poems will be represented in a electronic poetry collection which, apparently, will have its own printed edition (summer, 2021), when MILI DUELI BALKAN TOUR awaits us.

Also, all authors who are 2000 or younger will be presented at the MILI DUELI JUNIOR ONLINE POETRY CONTEST which will start a few days after the end of the eighth season of Mili Duels 2020 – Online Balkan Poetry Contest!

This group was amazing. I found a lot of beautiful poems, talented contestants and creative ideas- which amazed me. Some of the contestants did disappoint me: those poems showed the lack of everything I already mentioned. So: dull ideas, not enough talent… Some of them even tried so hard that it ruined the poem (when you try too hard, you pile up every single thought and every single sweet word you can imagine- and it has to be too much). Writer should always be aware of measure and balance. On this occasion, I had no time for writing comments for each of you separately, but I will be glad- if someone is interested in my opinion- to let you hear it. So, if there’s anyone interested in my criticism on his/her poem- feel free to message me. In the next round- all of you will get precise comments. Sorry for being so brief and good luck to all of you.

Dear authors,
First of all, congratulations to everyone on participating. I did not choose any of you for no reason, but in an extensive selection from the First Round (739 authors), I just wanted to cooperate and socialize with you. And really, I don’t regret the time I spent reading and presenting your poems, because each one taught me something.

Since poetry is subject to criticism, which makes it timeless, I am glad that I have founded the best possible team that will work on its selection. In this duel, the selection of poems was primarily done by the Montenegrin poet who is one of the best literary critic on the Balkans.

Reading your poems, I tried to find the originality that I always insist on, because only it can change everything. In this round, the President of the Jury certainly has the primacy in the selection of authors, and I asked her to present methodology of author selection. In this round I awarded two groups of authors: those who stood out in their poems with the originality of the expression and those who sent poetically mature poems but were very socially active when it comes to online communication in Mili Dueli.

I wrote a commentary for each author individually, in my notebook, and my practice has always been to address each author directly in the comments, but due to private obligations (about defending my dissertation at the faculty), I was not able to type it for you. But from the next round, there are definitely regular comments, the way I always do.

Congratulations to all on your trust … More than 23,000 comments have arrived in this round … for POETRY … for US. <3

You can look the entire duel on the social network Facebook, where it is presented on the official profile of Mili Dueli through several pictures:

See more about the organization of the Second Round here: