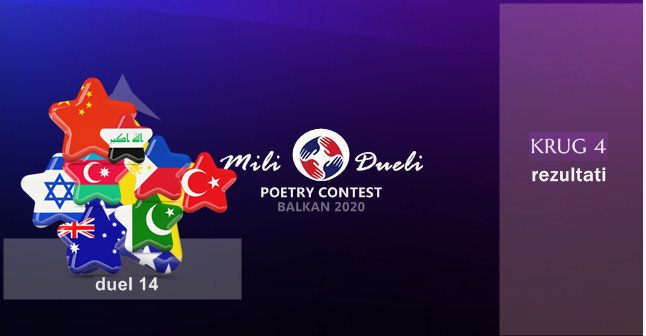 “Elif Sezen, Reema Bakose and Ahmet Işler were so close with the quality of their poems. I loved all three of those. Yet, since this is a semi-final round, therefore we have many good writers- small things make a difference.

Elif Sezen wrote a strong poem, a dramatic one, with a profound meaning. I can’t find the slightest flaw here. Every word is there for a reason, and it’s so meaningful and deep. I enjoyed it, really. It brings the emotion perfectly and it’s form , rhythm, melody- completely suit my preferences. Very well done.

Reema Bakose wrote a beautiful poem. Again we have a strong message with vivid energy and clear emotions and attitude. Yet, while reading, it somewhat felt intrusive at times. The poem lacks a natural flow. It’s very precisely done- but somehow it lacks a touch of disorderliness- just to feel it’s existence out of norms.

Ahmet Işler… This poem was like paintings before my eyes. It’s alive, it has an amazing emotion and it’s one very memorable poem. It stays engraved into the mind of a reader. It’s not perfectly done when it comes to rhythm- but those imperfections don’t make a difference here, since the bedrock and the roof of this poem is- pure emotion.

Alparslan Oghuz… This poem was quite pleasant for reading. I liked it. Yet, it’s not so intrusive in this group. It lacks some stronger moments, something more memorable.

Joan Lim… I do feel that this poem could benefit from the use of punctuation at some moments. Also, I find it a bit paler than the one from the last round. Sure, it’s still very good. I appreciate it’s vividness and the memorable motives. Emotion is clear and strong. I like the expression this writer owns. Also, the talent is undeniable.

Gili Haimovich… This is a sweet poem. I like it. Yet, it lacks some drama, some vivid energy- for this group. It has a deep meaning, but motives could be more impressionable.

Russel Edles… I appreciate the creativity with dialogue in this poem, but I think it wasn’t perfectly executed. I find it too ‘decorated’. It’s like watching a painting with so many colors that it feels chaotic. The poem is gentle, but it’s not as fluid as it should be. Also, the energy feels somewhat flat throughout the entire poem. It lacks contrast- which could strengthen the effect of the poem.

Muhammad Azram… I like the motives here. Also, the writer has a creative perception of the subject itself- and that makes the poem even better. It just doesn’t have a ‘spark’ which some of the poems in this group have. I think it lacks that dramatic ending or some stronger and impressionable moment to make it glow.”

You can read poems by Asian and Australian authors here: