Mili Dueli 2020 (8th season) had 739 entries from 52 countries. It is the largest and most popular online poetry contest in this area, which for the 8th year in a row brings together poets from the region, and lately from around the world. Mili Dueli is headquartered from Jajce, Bosnia and Herzegovina. The purpose of the contest is to encourage intercultural dialogue among artists from the Balkans and the world. As it is one of the most sensitive regions in the world with a turbulent past, the aim of the contest is to build bridges of culture and mutual respect between once war-torn areas.

The contest is traditionally composed of 5 elimination rounds. In each round, the number of authors decreases, and in the last, Fifth round, the winner is decided by a voting system based on the Eurovision Song Contest scoring system. The main responsible person of the contest is Nermin Delic, the idea creator and organizer of the contest. For 8 years in a row, Mili Dueli have been gathering authors and spreading the influence of poetry in everyday life.

Briefly about the Second Round: After the selection in the First Round by the organizer of the contest, Nermin Delić, 476 authors were selected and presented in the Second Round. In the Second Round, the authors are classified in 12 duels, according to the countries they come from. Due to the number of participants, Bosnia and Herzegovina had 2 duels (DUEL 1, DUEL 2), and Serbia 3 (DUEL 3, DUEL 4, DUEL 5). Croatia, Montenegro, Northern Macedonia and Bulgaria had one duel each (DUEL 6, DUEL 7, DUEL 8, DUEL 9). Due to the small number of participants, authors from Albania, Greece, Kosovo, Romania and Slovenia were presented in one duel (DUEL 10). Poets with Balkan roots, but with current residence outside the Balkans, are grouped together in one duel (DUEL 11). In the end, all other authors coming from non-Balkan countries are grouped into one duel (DUEL 12).

The beginning of the presentation of the duel on the official Facebook profile of Milih Duel was on July 12, 2020. Duels are presented in order, every 2-3 or 4 days according to the scope of the duel. For the first 15 days from the presentation of the duel, the followers of Mili Dueli were able to vote in the comments by entering the author’s number below the picture where his/her poem is presented in the description. In addition to the readers, members of the jury, composed of 12 renowned and important for Mili Dueli Balkan artists, also voted. They selected 90% of the authors to pass to the Third Round. The other 10% is intended for the votes of the readers, for those who were not selected by the jury, and who have the great support of their friends and companions Mili Dueli.

DUEL RULES: In Duel 10, all selected authors from Albania, Greece, Kosovo, Romania and Slovenia are presented. The number of participants in Duel 10 is 33. Duel 10 of The rest of Balkan authors after the Second Round has 25 authors. The national principle was applied here. None of the participating countries could lose more than 50% of the authors after the Second Round.

How about voting? The initial selection was made by the Additional Members of the Jury (2, 3). They have made a list of authors they think should go in the Third round, and authors they choose come from their speaking areas (Greek and Albanian). Having that in his mind, the President of the Jury (1) voted and apply national principle to make it all be equally.  After that, the votes of the Readers (4) were reviewed for the authors who did not pass that selection either, and according to the decision of the readers who followed the voting rules, an additional 10% of the authors were selected, as many contest rules as required.

Additional members of the jury sent their suggestions who should go in the Third Round. They could only vote in the speaking areas where they come from. Sarah Isufi reviewed the poems in Albanian and Lena Kyropoulos in Greek. After that, the President of the Jury, using the national principle, completed the other places in the Third Round.

Readers voted in the comments below 5 posted pictures in which a total of 33 poems of this duel were presented. The organizer reviewed all the comments, on all pictures of this duel and according to the rules selected 2 authors with the highest number of valid votes. 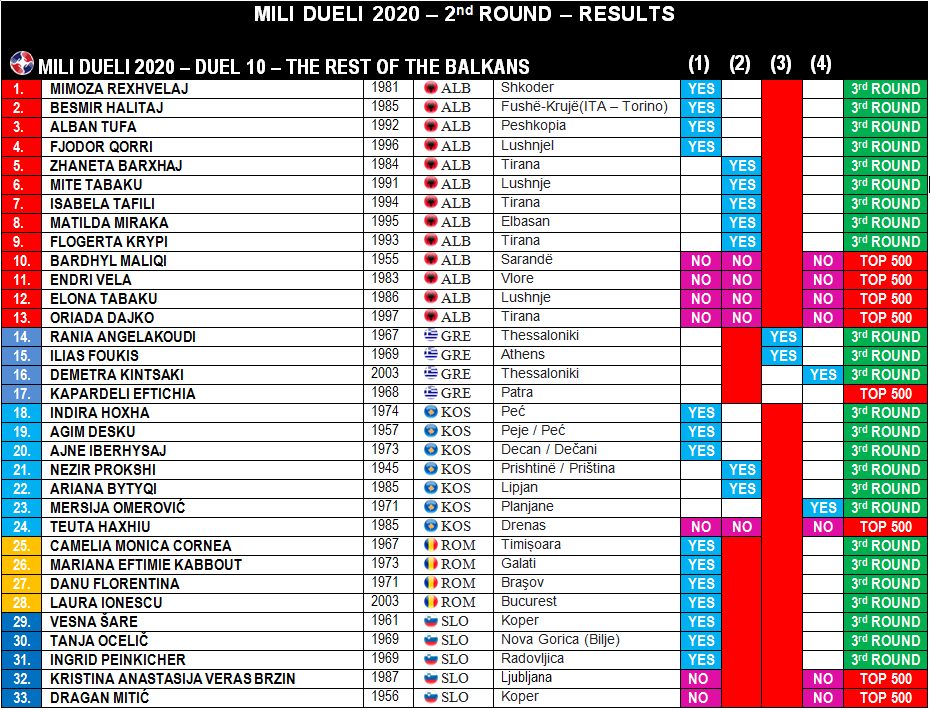 AUTHORS WHO PASSED to the next round of Mili Dueli will be informed on Facebook by a private message in the inbox about sending a new poem for the Third Round.

The third round will start in September, and the exact date with the rules of further selection of poems will be announced by the Organizer in the next few days. Please be patient!

AUTHORS WHO DID NOT PASS THE NEXT ROUND OF THE MILI DUELI, who remained in the TOP 500, will receive electronic recognition for their participation as they represented their countries, and will accordingly receive recognition for intercultural dialogue between the Balkans and the world.

All the presented poems will be represented in a electronic poetry collection which, apparently, will have its own printed edition (summer, 2021), when MILI DUELI BALKAN TOUR awaits us.

Also, all authors who are 2000 or younger will be presented at the MILI DUELI JUNIOR ONLINE POETRY CONTEST which will start a few days after the end of the eighth season of Mili Duels 2020 – Online Balkan Poetry Contest!

Dear authors,
First of all, congratulations to everyone on participating. I did not choose any of you for no reason, but in an extensive selection from the First Round (739 authors), I just wanted to cooperate and socialize with you. And really, I don’t regret the time I spent reading and presenting your poems, because each one taught me something.

Since poetry is subject to criticism, which makes it timeless, I am glad that I have founded the best possible team that will work on its selection. In this duel, the selection of poems was primarily done by the Montenegrin poet who is one of the best literary critic on the Balkans.

Reading your poems, I tried to find the originality that I always insist on, because only it can change everything. In this round, the President of the Jury certainly has the primacy in the selection of authors, and I asked her to present methodology of author selection. In this round I awarded two groups of authors: those who stood out in their poems with the originality of the expression and those who sent poetically mature poems but were very socially active when it comes to online communication in Mili Dueli.

I wrote a commentary for each author individually, in my notebook, and my practice has always been to address each author directly in the comments, but due to private obligations (about defending my dissertation at the faculty), I was not able to type it for you. But from the next round, there are definitely regular comments, the way I always do.

Congratulations to all on your trust … More than 23,000 comments have arrived in this round … for POETRY … for US. <3

ORIADA DAJKO: The first two verses are beautiful and worthy to be the opening of a great poem, but the continuation is too short, to specify a certain meaning.

ISABELA TAFILI: I like the way you pass the meaning of the whole poem, from one verse to another. Nice.

FLOGERTA KRYPI: Pointing social aspects in one poem, while protecting the needful softness, adds some witty flavor to the whole it. Good one.

ALBAN TUFA: Mixing the irony with a bit of sweetness, is a good strategy of writing, though. Keep it going.

MIMOZA REXHVELAJ: Some verses are alright, but the poem itself is old fashion a bit.

ZHANETA BARXHAJ: There’s some dark tone and personal vibe in your poem, which is always interesting to be read.

BESMIR HALITAJ: Your writing has almost the narrative style of a prose, which hardly classify it as a poem.

FJODOR QORRI: Organise your verses a bit more orderly, because the talent is there.

BARDHYL MALIQI: This is hardly even a poem. Good luck.

ELONA TABAKU: Nice dedication, but not everything that rhyme is a poem. Good luck.

MITE TABAKU: The dark tone, yet, represents your poem well. Good one.

AGIM DESKU: I like what you really want to say through his poem, but not the way you’re actually saying it. “Eden Garden”, “Ithaca”, “Titanic”, “Dante”, “Doruntina”, “Prometheus”, “Beethoven”, inside the same poem, is just too much to find the relation. Good luck.

NEZIR PROKSHI: This sounds like a grandfather’s story, you can enjoy close to the fire place, with a cup of tea. I like the historical vibe, mixed with clarity and emotions. Good job!

“She combines with a very unique way the words…She liberate the meaning behind them…and during reading this I felt the shoulder which dancing in the rain with flame ,passion and expectations to provoke the deniable NO….”

You can look the entire duel on the social network Facebook, where it is presented on the official profile of Mili Dueli through several pictures:

See more about the organization of the Second Round here: